Reflexology is the systematic application of pressure techniques to the feet, hands, and outer ears. Within each foot, hand, and outer ear there are zones and reflux areas that correspond to the organs and structures of the whole body. The nerve pathways in these zones and reflex areas create an electrochemical flow that communicates with the entire nervous system.

Through the application of pressure using specific thumb and finger techniques, reflexology connects with the peripheral nervous system and encourages the body to relax and return to homeostasis or balance. The premise is energy flow can be restored to the pathway which is blocked, resulting in stress reduction and physiological changes in the body.

Additional benefits include breaking up the lactic acid and crystal that are usually deposited in the feet and allowing energy to flow efficiently, increasing circulation bringing oxygen and nutrients throughout the body, and promoting normalization. When properly applied, a foot massage can leave a person feeling like they have received a whole-body massage. When comparing a foot massage to Reflexology, a foot massage is much more direct and less complex.

Derived from ancient cultures’ study of meridians, or energy channels, the practice of this therapy stimulates the complex pathways that wind throughout the body. Since many meridians connect different body systems to the feet, reflexology may be used to stimulate the digestive system, create a peaceful constitution, increase energy, promote self-healing and relieve pain.

The Reflexology Association of America defines it as “an integrative health practice, that maps the reflection of the body predominately on the feet, hands and outer ears. It uses unique manual techniques to deliver pressure to neural pathways assisting the body to function optimally.”

The effectiveness of this therapy is recognized worldwide by various national health institutions, including The National Institute of Health. Risks are minimal, after a session you may experience the following: lightheadedness, tender feet, increased urination, changes in sleep quality and energy levels. There are not many contradictions with reflexology, but critical ones to be aware of are acute infection, deep vein thrombosis and open wounds.

In a Swiss study, patients who had undergone reflexology sessions showed a significant decrease in the amount of medication needed. As a complementary therapy, it seems to work better with conventional treatment to treat certain diseases.

The National Center for Complementary and Integrative Health mentions a study funded by the National Cancer Institute, women with advanced breast cancer who received reflexology treatments showed improvement in a few symptoms, such as shortness of breath, but not others, such as nausea or pain. In this study, this type of thereapy was safe even for the most fragile patients.

There is confusion about the true origin of this powerful therapy that has helped thousands of people. The practice of Reflexology is thought to have been passed down through an oral tradition and possibly first recorded as a pictograph on the Egyptian tomb of Ankhamor 2330 BC. With the pivotal discovery of the captivating hieroglyphic mural in the pyramid located in Sakura, reflexology is considered part of Egyptian culture. Reflexology symbols are thought to be recorded on the feet of statues of Buddha in India and later China. Northern American tribes of Indians are known to have practiced a form of foot therapy for hundreds of years.

An in-depth explanation of Reflexology from the US National Library of Medicine:

Reflexology is a complementary therapy instead of an alternative therapy to other treatments which the patient already has based on reflexology maps. Complementary therapies nowadays are applied in many palliative care or to alleviate a problem without dealing with the underlying cause in order to make patients’ emotional, physiological, and spiritual health improve and increase the value of their life. Two methods of reflexology that have been excepted internationally are the Ingham method and Rwo Shur method. The first method does not use any tools in its practice and the second method utilizes the use of tools such as a wooden stick. 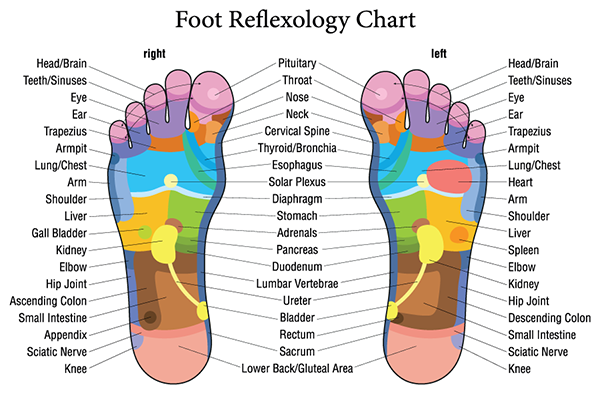 Click the image above to try this therapy on yourself!

HolisticNH takes your privacy seriously. We will never sell or share your personal information. Our site is protected by SSL (Secure Sockets Layer) and we are GDPR and CCPA compliant.

By clicking “Accept”, you consent to the use of ALL cookies.
Cookie Settings Accept All Reject All
Manage consent

This website uses cookies to improve your experience while you navigate through the website. Out of these, the cookies that are categorized as necessary are stored on your browser as they are essential for the working of basic functionalities of the website. We also use third-party cookies that help us analyze and understand how you use this website. These cookies will be stored in your browser only with your consent. You also have the option to opt-out of these cookies. But opting out of some of these cookies may affect your browsing experience.
Necessary Always Enabled
Necessary cookies are absolutely essential for the website to function properly. These cookies ensure basic functionalities and security features of the website, anonymously.
Functional
Functional cookies help to perform certain functionalities like sharing the content of the website on social media platforms, collect feedbacks, and other third-party features.
Performance
Performance cookies are used to understand and analyze the key performance indexes of the website which helps in delivering a better user experience for the visitors.
Analytics
Analytical cookies are used to understand how visitors interact with the website. These cookies help provide information on metrics the number of visitors, bounce rate, traffic source, etc.
Advertisement
Advertisement cookies are used to provide visitors with relevant ads and marketing campaigns. These cookies track visitors across websites and collect information to provide customized ads.
Others
Other uncategorized cookies are those that are being analyzed and have not been classified into a category as yet.
SAVE & ACCEPT