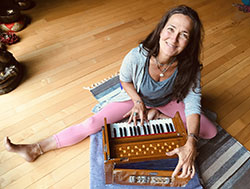 Katie, owner and principal teacher at Dragonfly Yoga Barn, is a fun-loving yogi known for singing and jamming with her band The Starlight Honeys, her love of cooking, gardening, her kitty cats, husband Declan, two kids, and of course, practicing YOGA! She can be found doing yoga in the mountain forest, on a rock, on a paddleboard, in a river, on snowshoes, on the beach… anywhere!

Offering yoga retreats and teacher training at Dragonfly Yoga and around the world has become a passion that continues to grow each year.

Katie is an Experienced Registered Yoga Teacher (E-RYT), has been practicing yoga for close to 25 years, has over 1,500 hours of yoga studies alone, and has taught over 15,000 hours since she began teaching in 2003. She has been training yoga teachers since 2011 and has studied with numerous veteran teachers and experts in the fields of Yoga, Ayurveda, and meditation since 2003: Paula Tursi, Bernie Clark, Dr. Paul Dugliss, Dr. Marc Halpern, Sudha Lundeen (Kripalu), Cora Wen, Janet Stone, Sadie Nardini, as well as many others. Katie studied Ayurveda Yoga Therapy with Marisa Laursen and Dr. Marc Halpern, head of the California College of Ayurveda, with whom she also earned a certification in the ancient science of Yoga Nidra.

Katie is an Ayurvedic Health Practitioner, studying under Dr. Paul Dugliss at New World Ayurveda and has over 1,000 hours of study as an Ayurvedic Practitioner and Ayurveda Yoga Specialist, as well as traveling to India each winter for Panchakarma therapy and to study Ayurveda with Sri Dr. Chandra Mouli. She also has numerous certifications in Thai Yoga with Peter Kaaberbol (2006), Sunny Klaber (2012), and T’ai Jamar Hannah (2013 & 2019), and is SUP Yoga trained by Michelle Clarke of Moondala.

Katie is a long-time student of Bernie Clark, one of the three primary Yin Yoga teachers in the West, having fallen in love with Tao Yin Yoga in 2008. Katie continues to study and is currently enrolled in Advanced yoga teacher training with Janet Stone, and completed a second year-long training with Dr. Paul Dugliss in Spiritual Mentorship and Heart-Based Meditation in early 2020.

Her greatest teachers of all are her students, her own children, and her husband and partner in everything, Declan, “The Dude” aka Dhadood.

Questions? Send us a message!